Back to all posts

JAIL WEDDINGS share "Do Anything You Want To Me"; L.A. Weekly's Band of the Year returns w/ new album 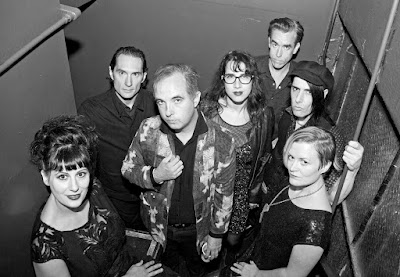 "Bombastic songs that walk the line between Nick Cave and Springsteen covering 'Lipstick Traces (on A Cigarette).' It’s a party, of sorts." -- Noisey


" A marriage between the Dream Syndicate, X, and the smoldering sounds of classic English post-punk, the tune is smart, energetic and more than worth the wait." -- PopMatters


L.A. psych-punk noir group Jail Weddings today announce their first new album in 5 years, Wilted Eden. The band shares the first single, a live show fan favorite for the past couple of years "Do Anything You Want To Me" via Bandcamp, YouTube and Soundcloud.


LA Weekly voted the band's previous album Meltdown -- A Declaration of Unpopular Emotion the #1 Album of the Year for 2014.


Wilted Eden, the expansive third album by L.A.'s tarnished romantics Jail Weddings is one of those rare albums recorded in "real time" chronicling the intersection between the whirlwind birth and eventual death of new love, along with the sudden unforeseen deaths of loved ones. Still standing in their 10th dizzying year, the Wall of Sound provocateurs return anew with an emotionally and musically charged 12-song epic.


The result is the sound of a veteran band that is now doing whatever the hell they want after a decade of tempering (and coining) a unique sub-genre often called death doo-wop. While a line-up change also opened new horizons, the group found the time and freedom to experiment in the studio with no gun to their heads - deploying guitar feedback, Theremin, analog synth, and skronking saxophone to their usual street-poetic, swollen-knuckle pop. Think of The Waterboys expansive "Big Music" sound on brown acid and you might come close.


Wilted Eden begins cinematic, but with what almost sounds like a closing credits theme - the title track is apocalyptic folk at its most definitive, as Hart's own minor chord three-part harmonies bring to mind The Byrds soaring over Death In June. It quickly ramps up with the driving rocker "Do Anything You Want To Me," a dare of absolute surrender that feels like The Smiths rhythm section backing up Steve Wynn. "Nowhere" is the full-tilt cowpunk barn-burner of the record, calling up ghosts of The Gun Club sharing a carnival stage with Freddy Cannon. Don't let the sweet title of "Face of Kindness" fool you - as it contains one of the more blue double-entendres on the album. "Blood Moon Blue" is pure unnerving ecstasy, wailing feedback over Lynchian twang like Rowland S. Howard fronting a lounge-lizard exotica act. "Skin Invocation" is a sexual revolution in just under 6-minutes, where singer/bandleader Gabriel Hart duets with back-up singer Mary Animaux; both of them seeing the athlete of pleasure in everyone before guitarist Anthony Cozzi dogfights with Hart's sax to climax. And if you're still on board until the very, very bitter end of what has proved to be a very loaded album, "Love Me Like I'm Dead" will give you a nine-minute stark testimony of just how far this once-in-a-lifetime, genre-thrashing band has come, If, that is, you haven't already run for the hills yourself...


Wilted Eden will be available on LP, CD and download on September 20th, 2019 via Tru-Vow Recordings. Burger Records will release the album on cassette. Preorders are available HERE.